The first thing that is noticeable is the introduction of a double handle, making it as easy for left or right handed people to use. The rotating laser itself feels a little bit heavier and therefore more robust than its predecessor. The Topcon RL-H4C now comes with the rechargeable battery pack as standard and has a charging jack incorporated, negating the need to remove the battery pack for it to be recharged. But should you find that the batteries are dead you can still use normal alkaline batteries whilst you recharge the battery pack, so you don’t have to stop working.

The Topcon RL-H4C is just as easy to use as its predecessor but is faster to automatically level itself up. With the automatic height of instrument alert you need not worry about working to incorrect levels, especially useful should the Topcon RL-H4C suffer a knock or be set up on soft ground. The red laser beam is also brighter making it easier to see against walls and features.

The Accuracy of the Topcon RL-H4C is ±10arcseconds (or 1.2mm over 30m distance) which is a 33% improvement in accuracy over the Topcon RL-H3C. Combine this with the new Topcon LS-80L receiver that has a precise mode of ±1mm and you end up with one of the most accurate laser levels on the market today. The Topcon LS-80L also has 11 grade information channels to aid the levelling work that is to be done. 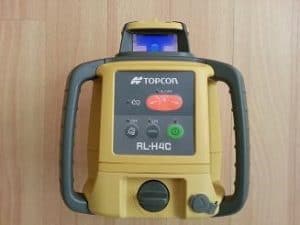 The Topcon RL-H4C incorporates all the features that you would need from a general purpose rotating laser level. It has a long range allowing you to work farther before having to reset. It can match slopes which is very handy for doing land drains or gently sloping groundworks. And it has improved accuracy.

Read what Topcon say about their RL-H4C Laser.

The Topcon RL-H4C has now been superseded by the Topcon RL-H5A. If you want the latest version of Topcon’s best selling rotating laser then read about on this site at Topcon RL-H5A Rotating Laser.