5 of the Greatest Errors to Affect Total Station Accuracy. 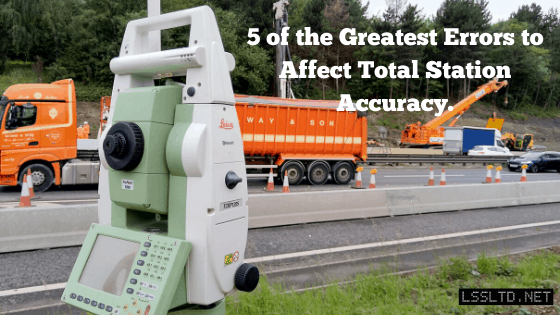 Total Stations are accurate, aren’t they?

Total Stations are very accurate pieces of equipment that are very expensive.  But what are the greatest errors to affect total station accuracy? When buying or specifying a Total Station we often only concentrate on the accuracy of the Total Station.  Most Total Stations on construction sites have an angular accuracy of five seconds or less and a distance accuracy within a couple of millimeters.  But even the most accurate of Total Stations can give inaccurate results if the ancillary equipment used with them is in poor condition, not adjusted properly or used poorly.

Do you know what the greatest errors to affect Total Station accuracy are?

In this article I shall be identifying what can severely impact the accuracy that can be achieved when using a total station.  Some might surprise you and others may not be a factor for you at all.  They are in some order of the significance that they have on the potential accuracy that can be achieved with a Total Station whilst setting out or surveying.  With all of what will be said below it is important to remember that the more accurate you want your results to be, the more time you need to spend to reduce the errors present in order to get the most accurate results.

But first of all, let’s remind ourselves of what accuracy means in surveying.

What is accuracy and precision in surveying?

Precision refers to how close repeated measurements are to each other. In this case when using a Total Station, how close together are the measured Eastings, Northings and Elevations.

1.) Make sure your tripod is in good condition.

If your tripod is not in good condition this can seriously affect the accuracy achieved when using a Total Station.  Recently, an engineer joined me on a construction site.  He was using a Robotic Leica TS16 Total Station and was doing his first resection on the site with it.  Using the same site control stations that I have been using (see the guide to doing a resection) he was not able to get an accurate resection.  After several attempts at setting up a resection and only getting a 3d quality of 35mm, much greater than the quality required for this type of work. The 3d quality is a measure of the accuracy of the resection, the greater the number the worse your resection is. I would expect to have a 3d quality of less than 10mm for setting out works.  The reason for this poor resection setup was the tripod he was using had too much play in the joints near the head of the tripod. Have a look at the video below.

This was a relatively new heavy-duty tripod (about 6 months old) and had no obvious signs of damage but the fixings were loose to the legs and the head.  Whenever the total station was rotated the head of the tripod would move and this would alter the plumbness of the total station.  In this case, the movement was significant enough for the total station to have to be re-levelled. This tripod is a worry to me, as there is so much play in it. My worry is that this tripod will collapse and fall over with a very expensive total station attached to it.  When total stations fall over on site they invariably lead to very large bills, often running into thousands of pounds.

Quick and Easy Test on a Tripod

2.) Do Not Just Re-Level the Total Station.

Re-Levelling the Total Station will alter the Height and Position of the instrument.

When the total station does go out of plumb, the following checks would be needed to be done.

3.) The Optical or Laser Plummet being inaccurate on the Total Station.

This is only a factor if setting up over a known point.  Follow this quick and easy guide to setting up a total station above a known point.  The check for the optical or laser plummet can be done once the setup of the point by observing the known point via either the optical or laser plummet whilst turning the Total Station through 360degrees, ideally at 90degree intervals.  If the observed point or laser dot moves significantly then adjustment is required.

What do we mean by a significant amount? For general site setting out or surveying, we would not want to see more than 2mm movement of the point or laser dot.

If you are finding that you are getting significant movement with your laser or optical plummet, then it is best to get it checked out by your local specialist survey equipment supplier. This is most likely something that you can’t alter yourself.

However, this test may highlight that there is a problem with the tripod that the Total Station is mounted on.  So, ensuring that the tripod you are using is in good condition is vital.

4.) The Detail Pole Being out of Plumb.

The Total Station only measures to the prism. The point (Bottom of the Detail Pole) of the detail pole is assumed to always be directly below the prism, and thus the position calculated (the point surveyed or set out) is a vertical offset from the prism which is the height of the prism that is entered into the total station.  If the detail pole isn’t plumb then there is the potential for the distance measured being either too long, to short or to the left or right. Depending on the way you are holding the detail pole in relation to the total station, then it can be a combination of all of the above.

How to check your Detail Pole.

Using your quality spirit level, check the detail pole by offering up the spirit level to check the verticality.  This needs to be done at 90degree intervals (this is to check both axis’ of movement).  If you find that your detail pole is not level, then it will need to be adjusted and this is best done on a special rig at your local survey equipment specialist.  If you have the patience, then you can adjust it yourself by plumbing it up and using the adjustment screws under the circular vial.

5.) The Type of Prism being Used and Prism Constants.

The type of prism being used can affect the results given by the total station.  Best practice would be to use the same prism manufacturer as the total station manufacturer.  This way you can ensure that your prism constants and height of prism stations are correct.  This especially applies to aftermarket prisms as often aftermarket prisms will not have a prism constant set, or as I have seen have incorrect prism constants stated. This maybe down to the use of inferior glass or manufacturing tolerances used for the non-genuine prisms and prism mountings.

Why do we have Prism Constants?

There are a couple of main reasons why we have Prism Constants. These are.

Make Sure the Prism Constant is Correct.

For a good run down on the Leica prism constants have a look at this website that details them, https://lasersurveyingequipment.com.au/leica-prism-constant-explained/

One final point on prisms to mention is the position of them relative to the detail pole.  This does depend on the prism and the attachment type that is used.

On some of the Leica 360-degree prisms there is a yellow arrow that ideally needs to be pointing towards the total station. This is because there is some variance in the prism centres when mounted together. This variance is minor, but it is there. For this reason, if I am using a total station for levelling as well as setting out in plan, I prefer to use a Leica (0mm offset) mini prism.

When using standard circular prisms, it is also worth noting that these should be in good condition and the prism should not droop when being used.  This is particularly prevalent on the larger circular prisms.  A prism that droops during use will alter the levels being taken and the true offset of the prism.  The level issue is particularly prevalent when using robotic total stations that automatically track the centre of the prisms.  Have a look at the pictures below to see what I mean.