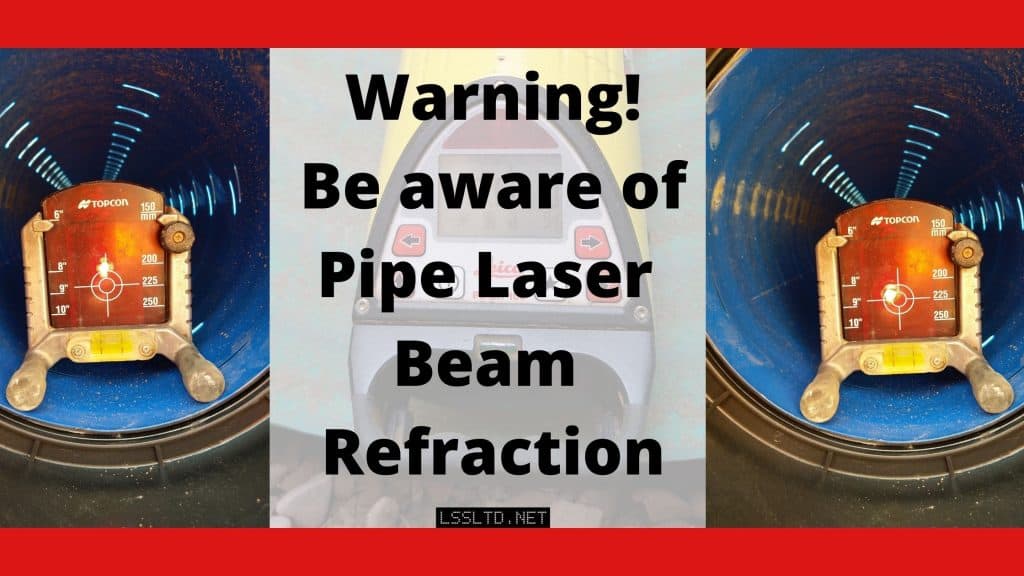 Can a Pipe Laser Beam Refract.

At least they do most of the time.

The pipe laser dot can move. This movement will be due to refraction of the laser beam through the pipe. Often pipe lasers move during the day. This is the most common complaint from the guys laying the pipes. Most complaints happen after the lunch break. I often hear, the pipes we put in this morning are low. The complaints seem to be more common when using the smaller diameter plastic pipes.

Why would a laser beam refract through a pipe?

Light can be refracted (or bent!) when it travels through different densities of air or other clear substances or objects. Whenever you see heat haze on a hot summer’s day, this is the light you are seeing being refracted. It is the same phenomenon that make people think they see an oasis.

When laser light travels through a pipe, it can be subject to a wide range of atmospheric conditions. Conditions that can be way different to the normal outdoor conditions. These can be wide range of temperatures and of different air mixtures. Carbon Dioxide is heavy than air (denser). Without a free flow or exchange of air there could be a build-up of different gases within the pipe network.

The point to take from this is that the atmospheric conditions can be quite different to that that we normally experience. Have you ever noticed that it is extremely easy to speak to someone through a network of pipes? This is because sound waves need air (or a medium) to travel through. This is because the air in the pipe network is confined and the sound energy cannot dissipate as readily as it can in an open space.

The Pipe Laser dot cannot move that much, can it?

The 24th June 2020 was one of the hottest days during the year in the UK. And on this day, we were laying a 225mm diameter perforated black drainage pipe. The 24th June 2020 was also a sunny day. We had put in about 30m of the black twin wall pipe. Not much of the pipe run had been backfilled due to waiting on pipe gravel. This will have accentuated the movement of the laser dot.

We were due to carry on laying the pipe after the lunch break. However, the guys were telling me that the laser dot was moving around. They could not follow the laser beam with the amount movement from the laser beam. For the rest of the day we had no option but to not lay anymore pipes using the pipe laser.

I had not observed this movement before. So, I videoed the pipe laser beam moving around. The video I took is shown below. It is only about a minute long but should give you an idea of how much refraction of a laser beam can take place in a pipe.

What can be done to stop Laser Beam Refraction?

I have never used a device like this. I do not know whether this will solve the problem of laser beam refraction within a pipe. The only information I know about any pipe blowers is here Pipe Blower for Pipe Construction

If you are wondering about an alternative to the pipe blower for pipe construction, then I would try a leaf blower. I have not tried this but see no reason why it would not work. A word of warning though, do not get a petrol powered one as the exhaust gases will accumulate in the excavation. Try one of the battery powered leaf blowers like these one below.

The laser beams from pipe lasers can be refracted. If we know that this can happen then accounting for it can be easier. Being aware of what is happening is the first stage of solving the problem. I will from now on be more careful when using pipe lasers.

Pipe lasers are still perfectly accurate pieces of equipment. They do help make pipe laying quicker, easier, and more efficient. Do not stop using pipe lasers because of what you see here. Just be aware of what can happen on extremely hot days.