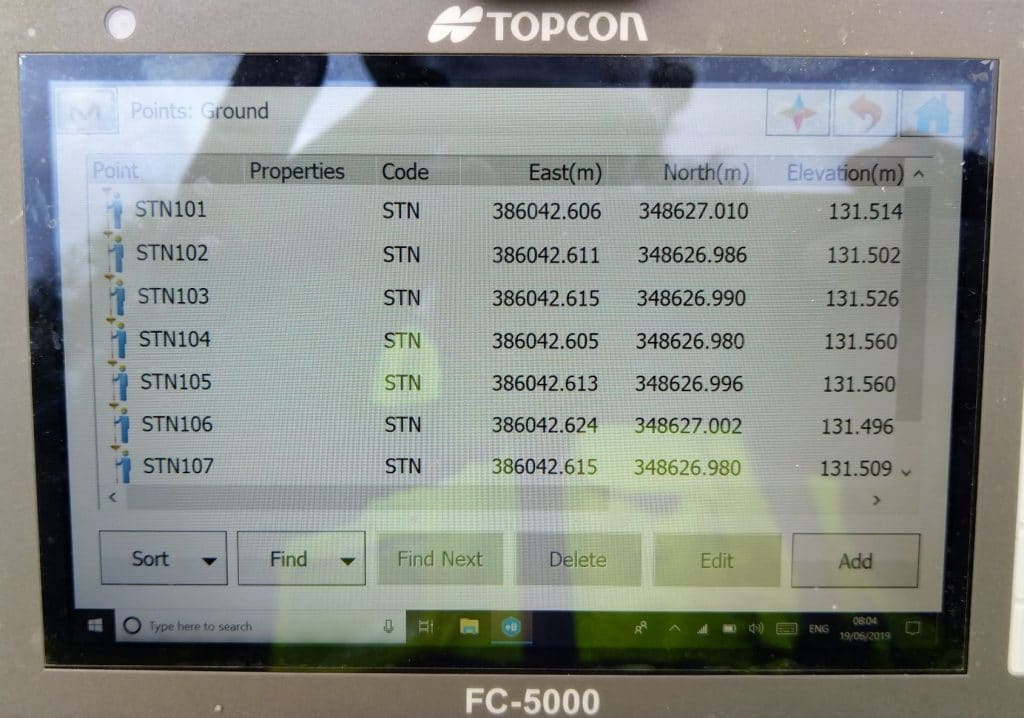 GPS is the term given to the Global Positioning System (GPS) that we all use in some form or other to locate ourselves in the world.  Most of us can only get our position to within 10m using over the counter GPS devices.  Surveyors, however, can achieve an accuracy within millimetres using surveying GPS equipment and software. It is worth pointing out that not only is there the GPS system of satellites, there is also the GLONASS and the Galileo satellite systems in use also.  Effectively, the more satellites that you can get information from, the more precise your position will be.

What is a GPS Rover?

A GPS Rover is a piece of equipment that can receive the signals from the GPS Satellite System to give an instantaneous 3-dimensional position anywhere in the world.  For a GPS Rover to be accurate it needs to receive corrections from a GPS Base Station.

What is a Network GPS Rover?

How Accurate are Network GPS Rovers?

We are told that Network GPS Rovers have cm accuracy. This means that with the correction service that Network GPS Rover knows its position within a 20cm sphere (the size of a small stone) anywhere in the world. I have been using Network GPS Rovers for the past 10 years. (I do also use the RTK Base Station GPS System, and this would be my preferred method). It was in 2013 that I was using a Leica Network GPS Rover that I first noticed some discrepancies with the results that I was getting with this equipment.  The main discrepancy that I noticed was a difference of around 100mm in level on the same point after collecting numerous observations.  Since then I have been cautious about using GPS Network Rovers for setting control points on sites. I still prefer to use GPS to establish a long base line and then traverse all the control points in with a total station.

Recently though, I had a different Network GPS Network Rover and decided to repeat the process that led to the discrepancies I found all those years ago to see if they are still present. But first what do I mean by accurate?

What is accuracy and precision in surveying?

Precision refers to how close repeated measurements are to each other. In this case how close together are the measured Eastings, Northings and Elevations.

Which Network GPS Rover has been selected for this test?

For this test I have used a Topcon Hiper SR with a Topcon FC-5000 Field Controller with corrections from the TopNET service.  The detail pole is a Topcon specific detail pole for the Hiper SR GPS unit and a bi-pod to keep the GPS unit still throughout the measurement recordings.

Methodology for the test on the Network GPS Network Rover?

I have set up a control point on a site within the UK. This is a PK Nail (a nail with a circular depression in it) that is in a stake that has been driven into the ground by at least 600mm. This control point has been protected from site traffic and installed in such a way that it is not subject to any positional movement.  The idea of this is that it replicates the real-world environment of where this equipment will be used.

Using a bi-pod ensures that the GPS Hiper SR unit stays in a fixed position. This is much more accurate than holding it by hand.  Holding it by hand could result in a large movement in the easting and northing direction compared to the quoted accuracy from the field controller.  The field controller would indicate that the accuracy would be within 2mm, but if I was holding the detail pole free-handed then the GPS unit could be moving by more than 20mm during the readings.

The Topcon Hiper SR unit was always set at a height of 2m above the PK Nail for each of the tests. With the base point of the detail pole set on the PK Nail centre, the detail pole was plumbed up using the circular vial on the detail pole and secured with the bi-pod.  The detail pole was checked for plumbness in each direction before being used for this experiment.  The measurements were taken for a period of 60 seconds each time.  Once the Hiper SR was set above the known point, the FC-5000 was connected to the Hiper SR via Bluetooth and connected to the TopNet service for corrections.  For this experiment we are only interested in taking reading whilst we have a fixed solution, so the status of the system was checked to ensure that only a fixed solution was used.

What are the three different GPS Solutions?

But when we look at the maximum difference in these positions, we can see

It must be said that the above accuracy is very good.  The signals from the satellites are travelling over 20,200km or 12,550miles to reach the GPS Receiver so to be able to coordinate the same point to within 100mm is pretty amazing.