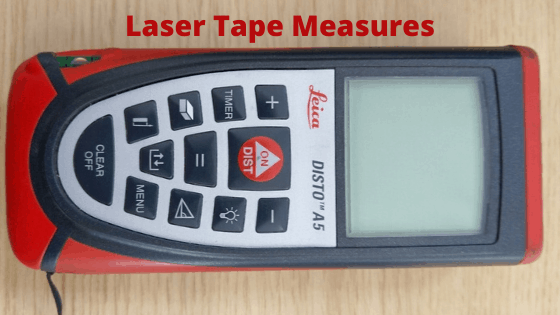 Laser Tape Measures have been around for a number of years now. They are becoming more common and are readily available in most DIY stores and online at very reasonable prices. They were once the preserve of professionals who were taking lots of measurements throughout the day. In this article I will be going through the basics of Laser Tape Measures.

What is a Laser Tape Measure?

A Laser Tape Measure does the same job as a standard Tape Measure, but it uses a laser to measure the distance instead of the physical steel or fibre of a traditional graduated tape measure.  They use the same technology found in reflectorless total stations.  By emitting a beam of laser light and measuring the time it takes to be reflected back off a surface the Laser Tape Measure can work out the distance accurately.

Are Laser Tape Measures known by any other name?

A lot of people, including myself, would refer to a Laser Tape Measure as a “Disto”.  This is because the first laser tape measures that were popular were the Leica Disto’s.  And Leica produce numerous total stations using this laser distance measuring system, and have done for many, many years.  The first Laser Tape Measure I bought was a Leica Disto A5 in 2007, and I still have it now.  The Disto name is a trademark of Leica.  Think of the term Disto as you would Hoover for a Vacuum Cleaner.

Yes, they do, and they work very accurately too.  I have had my Leica Disto A5 since 2007. I find it very handy for measuring remote features or longer lengths where a traditional tape would prove awkward.  A good example of this would be measuring the internal dimensions of a room.

What Advantages does a Laser Tape Measure have over a traditional tape measure?

Then main advantage I find with Laser Tape Measures is that I can measure distances to remote or inaccessible objects.  But one advantage that surprised me after owning the Leica Disto for awhile, was that I could also use the laser tape measure to measure distances to objects that I didn’t want to touch.  One example of this would be measuring the clearance to overhead powerlines (but the best tool for this would be the Suparule), and they are one thing you definitely don’t want to touch!!!

Also, the laser light measures straight between the device and the reflected surface, thus guaranteeing the shortest measurement.  This removes a potential error from your measurements due to Tape Sag or following contours of an object.

How far can a Laser Tape Measure reach?

The Leica Disto A5 should measure up to 200m.  Testing this outside the other day I managed a range of 132m.  But I think that measuring a distance greater than this in the area I was would have been difficult.  Generally though I wouldn’t be using the Leica Disto to measure these sort of distances, I would be using a Total Station.

How do you use a Laser Tape Measure?

How accurate are Laser Tape Measures?

This is of course dependant on what and how far you intend to measure. Overall though, I would say that a laser tape measure will be more accurate, in most applications, than the traditional tape measure.

Laser Tape Measures use laser light to measure distances.  But, like most things in life, they are only dangerous when they are being used inappropriately.  Most laser tape measures use a class 2 laser.  This means that the laser beam maybe hazardous to eyes.  Do Not stare directly into the beam.  Eye protection can be as simple as averting your eyes or blinking.  It would be best practice to not point the laser from laser tape measures at people’s faces.

How do you check a laser tape measure?

The second measurement check has been done in the same manner, but this time I have measured a distance of 8m (8000mm).  I have laid out the traditional Stanley tape measure on a flat floor and put the end against the skirting board, I will be measuring to the skirting board with the laser tape measure too.  Once more I align the Disto with the 8m

What is the Best Laser Tape Measure on the Market?

Can a Dumpy Level Measure Distance?

5 Ways a Surveyor or Engineer can Achieve Accurate Levelling