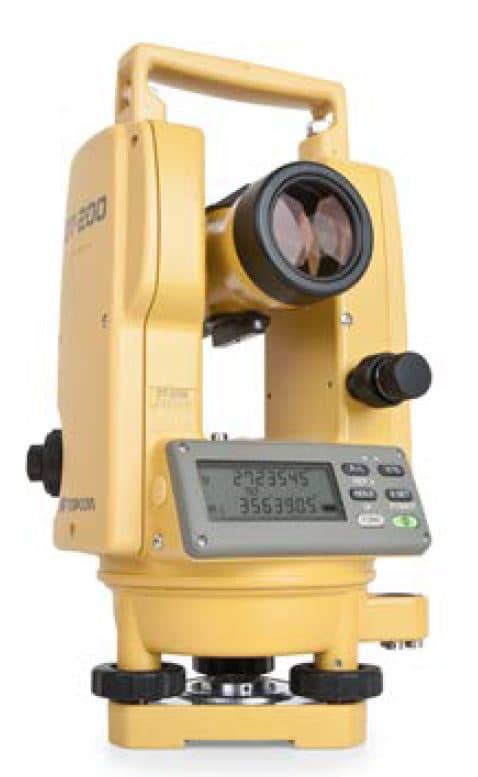 These theodolites are straight forward to use and fast to setup, ideal for busy construction sites.  The screen and interface on the Topcon DT-200 series is simple to use and easy to see thanks to the large display that is a backlit LCD screen.  The large display shows both horizontal and vertical angle in the degrees, minutes, seconds format and also displays the battery status.  The Topcon DT-205 and the DT-205L come with displays on both faces as standard.

Every theodolite in the range comes with an integrated optical plummet, making setting up over know point a doddle.  Read this guide to setting up a theodolite above a known point for easy and quick setup of a theodolite, Theodolite setup guide.

The Topcon DT-205 has 30x magnification along with a very short minimum focusing length of 1m (or 3 foot).  Opt for the Topcon DT-205L and you get a red laser pointer (class II) that emits directly from the lens.  This can be seen in direct sunlight about 50m from the theodolite.  This is a very handy feature when trying to line in bolts or measure offsets from a line.

The Topcon DT-205 and the DT-205L are powered by 4No. AA batteries which last up to 140 hours in continuous angle measurement mode.  With the Topcon DT-205L, the batteries will last up to 45 hours with the Laser pointer in use.  This is still a full week of work on most construction sites.  For best results we would advise using alkaline batteries instead of NiCad rechargeable batteries.

The Topcon DT-205 and the DT-205L has an IP66 rating, which means it protected against dust that may harm the instrument and is protected from low pressure water jets.  It also has an operating range from minus 20 degrees Celsius to 50 degrees Celsius.

The Topcon DT-205 and the DT-205L are accurate to 5 seconds, a unit of angular measurement.  In the real world at 200m away from the Topcon DT-205 you would could expect to be sighting within 2mm, either side, of your desired point.  If you use both faces when taking measurements then you can reduce this error.

If the Topcon Theodolites are not for you, then you can always check out these alternatives and check out the latest prices.